Skip to Main Content
It looks like you're using Internet Explorer 11 or older. This website works best with modern browsers such as the latest versions of Chrome, Firefox, Safari, and Edge. If you continue with this browser, you may see unexpected results.

A curated list of open video collections for the CEU community.

Film Catalog of the Vera and Donald Blinken Open Society Archives
The over 10,000 hours of film and video collections at Blinken OSA come from various sources: individual donors, independent media groups, human rights organizations and private archives, while others were created by the OSA. See also their YouTube channel.

Anarchist Film Archive
A collection of anarchist films from Christie Books in the UK.

British Pathé Newsreels (1910-2008)
Thousands of highlights from British Pathé and the Reuters historical collections of newsreels.

Colonial Film: Moving Images of the British Empire
Over 6,000 films showing images of life in the British colonies. Over 150 films are available for viewing online. You can search or browse for films by country, date, topic, or keyword. 350 of the most important films in the catalogue are presented with extensive critical notes written by their academic research team.

Critical Commons
A public media archive and fair use advocacy network that supports the transformative reuse of media in scholarly and creative contexts.

HiBROW: The Arts Online
Hundreds of professionally produced videos on the visual arts, cinema, music, literature, theatre, dance. For free and on demand.

Steven Spielberg Jewish Film Archive
More than 300 films available for Internet viewing. Held in the United States Holocaust Memorial Museum. Many, but not all of these are freely available to view. 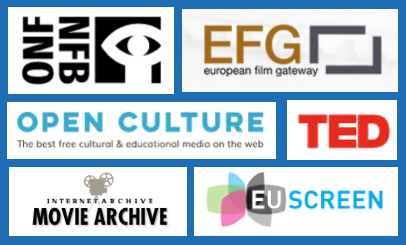 Documentary Film on Vimeo
A place for Vimeo's documentaries including full documentaries, single chapters, or extended trailers, over 3 minutes in length.

EFG: European Film Gateway
The European Film Gateway is a web portal offering access to film and film-related treasures collected and preserved by over 30 European film archives. It is a search engine which offers you centralized access to digital collections dispersed on different national websites. Instead of having to visit the individual websites you can search through them via the EFG.

More open video from around the world
For more sites with open video content, see the Film/AV Collections of FIAF Affiliates Online from the International Federation of Film Archives.